The Roman Republic suffered a deep financial crisis in 90 BC, according to a study

At the beginning of the first century BC. BC, the Roman Republic experienced a multi-year financial crisis, which we can call “Roman inflation”. But while scholars knew that some sort of collapse of the Roman financial system had occurred around 90 BC. AD, they didn’t know much about how Rome had responded to the problem. That has now changed, according to a new study recently completed by classicist Kevin Butcher of the University of Warwick and archaeologist Matthew Ponting of the University of Liverpool in England. The new study, not yet published, according to the University of Warwick press release, helped shed light on the nature and depth of the crisis, which was apparently marked by a high level of Roman inflation during the period of the republic which continued for some centuries. Warwick’s press release on the study reveals a steady trend in Roman inflation that has led to crisis after crisis.

Roman inflation at the time of the Republic has been continuous over the centuries, as recent analysis of Republic silver coins has revealed. Until 90 BC. AD, silver denarii were 100% pure silver, but three years later they already contained 10% copper alloy. ( University of Warwick )

To learn more about how the composition of Roman coinage might have changed 2,100 years ago, the two professors recruited Dr Adrian Hillier from the STFC Rutherford Appleton Laboratory in Oxfordshire to carry out a detailed metallurgical analysis of the ancient Roman denarii (coins) dating from the Roman Republic period. Much to the surprise of everyone involved in this project, coins made from pure silver before 90 BC were found to contain up to 10% copper alloy three years later.

“The discovery of this significant fall in the value of the denarius has shed new light on Cicero’s allusions to a monetary crisis in 86 BC,” Professor Butcher explained in a University of Warwick press release discussing the new study. “Historians have long debated what the statesman and scholar meant when he wrote ‘money was thrown everywhere, so that no one could know what he had’ (De Officiis, 3: 80) and we believe we have now solved this puzzle.”

Presumably, coins made from 10% copper would have been about 10% less valuable than coins made only from silver, which translates to a Roman inflation rate of 10%. People holding older pure silver coins would not have been spared, as merchants would have had to raise prices for everyone.

Currency deflation and price inflation would have been universal. If everything became 10% more expensive between 90 and 86 BC. AD, everyone in the Roman Republic would have experienced a worrying and anxiety-provoking loss of purchasing power, which would have raised fears that things were getting worse.

“The Romans had been accustomed to extremely fine silver coinage, so they may have lost faith in the denarius when it ceased to be pure,” Dr Ponting said. “The precise level of debasement might have been less important to contemporaries than the mere realization that the coin was forged and no longer genuine ‘silver’.

As we have seen in modern inflationary times, people will blame their political leaders when their money suddenly loses value. The authorities overseeing the finances of the Roman Republic would have been highly motivated to resolve their inflation problem as quickly as possible, knowing that the consequences could be disastrous if they failed to do so. 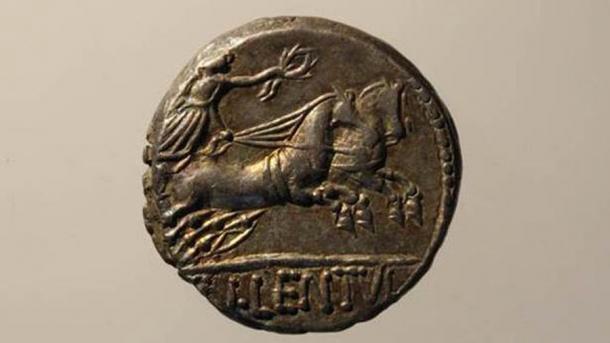 One of the silver coins from the Roman Republic period which was used to show how Roman inflation rose to the point of societal collapse less than 200 years later. ( University of Warwick )

A crisis caused by the war

In Cicero’s work, he discusses the actions of a certain Marius Gratidianus, a politician and administrator who took credit for monetary reforms in the 80s BC that apparently ended the financial crisis. Cicero was Gratidianus’ cousin and by all accounts they had a friendly relationship, but he nevertheless criticized the politician for seeking personal glory instead of admitting that Roman rulers had worked together to save the financial system by threat to the Republic.

Like so many other financial calamities in the centuries that followed, the financial crisis of the Roman Republic was brought about by the high costs of war. Political leaders have long relied on borrowing to finance adventures abroad, and many struggled to repay their loans after the conflict ended.

“In the years after 91 BC. AD, the Roman state was in danger of going bankrupt,” Professor Butcher explained. debt crisis… in 86 BC. J.-C., there also seems to have been a crisis of confidence in the currency.

This last crisis was provoked by the first. Republic rulers apparently sought to inflate their money supply by diluting it with other metals, making it easier to manufacture coins in larger quantities. This would allow them to pay off their war debts more quickly, as the money they had to do so would increase. Unfortunately, this would have triggered inflation or a loss in the value of the currency, which would have hit the average Roman hard.

The new research project analyzed a range of Roman coins made during this period and detected a gradual decline in their purity over a four-year period from 91 to 87 BC.

“Instead of being a pure silver coin, the denarius first dropped to less than 95% fine, then fell back to 90%, with some coins as low as 86%, suggesting a severe currency crisis. “, said Dr. Ponting.

As Cicero recounts, Roman politicians and administrators collaborated to find a solution to the crisis, as they realized that the depreciation of their metallic currency had begun to cause more problems than it solved. Rightly or wrongly, Gratidianus took credit for the solution that was ultimately chosen, whatever it might have been.

“One theory is that Gratidianus fixed the exchange rate between the silver denarius and the bronze denarius [the copper alloy added to the coins]said Professor Butcher. “Another is that he published a method to detect counterfeit denarii, and thus restored confidence in the currency.”

These theories have been around for a long time. But Prof Butcher has offered a new explanation, based on his and Dr Ponting’s finding that after 86 BC the Romans stopped mixing the copper alloy into their silver coins.

“It is all the more remarkable that around the time Gratidianus issued his edict, the level of fineness rose sharply, reversing the debasement and restoring the denarius to a coinage of high quality,” he said. declared. “Although the precise chronology remains uncertain, new scientific data suggest that [this] could have been the main purpose of the Edict of Gratidianus, rather than something to do with exchange rates between silver and bronze or the detection of forgeries.” 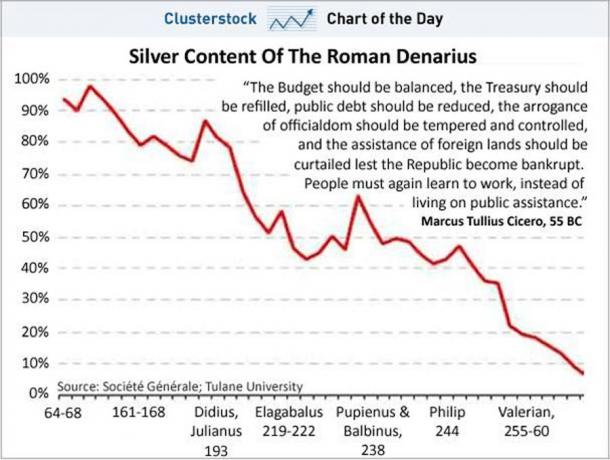 To understand Roman inflation in 90 BC, consider this table which shows the silver content of the silver denarius from 64 AD to 260 AD. ( Mindomo)

Empires and republics come and go, but inflation is here to stay

This new study reveals how long societies have been forced to deal with inflation or devaluation of the money supply, and all the problems this brings. Inflation was a problem for the Roman Republic in 90 BC, and it’s an equally big problem for the global economy today, more than 2,100 years later. Inflation cycles plague modern capitalist economies, just as they have plagued older economies that existed long before the rise of capitalism.

The current inflationary spiral is somewhat different from that experienced by the Roman Republic, as the current unrest arose in part as a result of a global pandemic. A better comparison for Rome would be what happened in the United States in the early 1970s.

Concerns over war debts led the Roman Republic to decide to devalue its currency in the early first century BC. More than 2,000 years later, the Nixon administration chose to devalue the US dollar, in order to help the country more easily repay the debts accumulated during the Vietnam War. In the first case, the strict silver standard for Roman coinage was abandoned, while in the second case, President Nixon removed the dollar from the gold standard. Both devalued the currency and caused inflation, but represented solutions that seemed practical and necessary at the time.

The final truth is that inflationary cycles are the inevitable result of any type of monetary system, regardless of time or place in history. Political leaders and economic pundits have never figured out how to completely eliminate inflation risk and probably never will.

Top image: Roman inflation from 90 BC. J.-C. ends up bringing the Roman Republic to its knees! The Roman Forum, the financial and political center of the city and the Republic would have been a busy place as Roman inflation began to destabilize the entire Roman world. Source: Jebulon / CC0

The Aes Grave bronze coin during the Roman Republic