Archaeologists in England have discovered a monumental ancient building. Not only was it the burial place of a powerful chieftain, it was the largest site of illegal silver production or forging during the time of Roman Britain.

The ancient crypt was discovered in 2005 at Grange Farm, in Gillingham, Kent, England. Archaeologists inspecting the site ahead of a house-building project discovered two iron spearheads, which then launched a 15-year research project that resulted in the recovery of 453 Roman coins, 20,000 pottery fragments weighing 259 kilograms (571 pounds) and 8,000 animal bones.

Now researchers have announced they have amassed 15 kilos (33 pounds) of “litharge”, which is the largest amount ever found at a site in Roman Britain. Litharge is a secondary lead oxide by-product of silver mining, which forms from the oxidation of galena ores. This 15-kilo transport suggests that a Roman-period clan was making money illegally, behind closed doors and away from the watchful eyes of Roman tax officials.

Iron spearheads have determined that Grange Farm was occupied around 100 BC during Late Iron Age Britain. Excavations have shown that during the time of Roman Britain, metal mining took place at one end of a building while chimneys were installed in its center, and at the other end, evidence of “high level domestic use” were found. Further suggesting elite use, a gold chain was also found scattered among the rubble of the mausoleum which was decorated with carefully faceted variscite beads.

A report in the Daily Mail says researchers believe a large clan worked farmland, raised animals, and hunted. But they also secretly made illegal money. At the height of Roman rule in their colony of Britannia, between the 3rd and 4th centuries AD, gold and silver were the standards of the island economy.

The Romans introduced gold aureus for large payments, which had a fixed value of 25 silver denarii until at least 200 AD. This coin was the main general purpose value coin, so it was a key player in imperial taxation. And that’s why Grange Farm investigators believe the goldsmithing at the site ‘may have been done illicitly’. 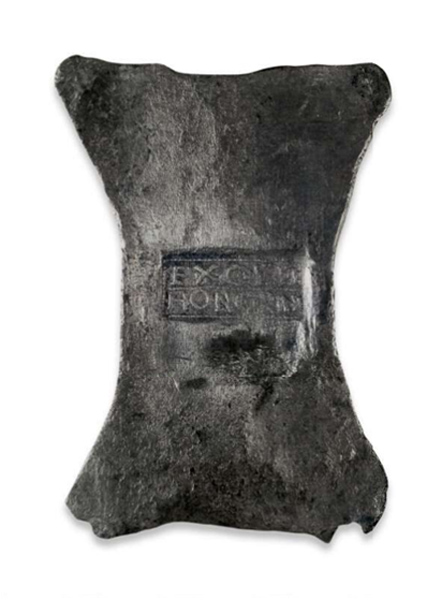 An officially stamped Roman British silver bar, produced between the 4th and 5th centuries AD, weighing 353 grams (0.78 pounds). The stamped inscription reads EX OFFE HONORINI, which translates to “from the workshop of Honorinus”. It was found in 1777 along with two gold coins from Emperor Arcadius and one from Honorius, and dates from the late Roman period in Britain. (© Trustees of the British Museum )

A Roman-era goldsmith site, with a mystery

Dr James Gerrard, a lecturer in Roman archeology at Newcastle University, said exactly why people were refining silver from silver-rich base metal alloys remains “a mystery”. Additionally, he says the clan “probably didn’t” mint silver coins. He reached this conclusion because the tests carried out on the bronze coinage contained too little silver in the alloy. “Perhaps they were making silver items like the Canterbury hoard bullion,” Dr Gerrard suggested.

The professor believes the site was a 3rd or early 4th century mausoleum, a storage house for the dead, which was originally built of stone with a tiled roof. A plain mosaic reddish cobblestone was discovered on the outside of the building, described as being “really unusual for Roman Britain”. The site remained inhabited in Roman times, and it evolved until the 5th century AD, and some time later it was abandoned. 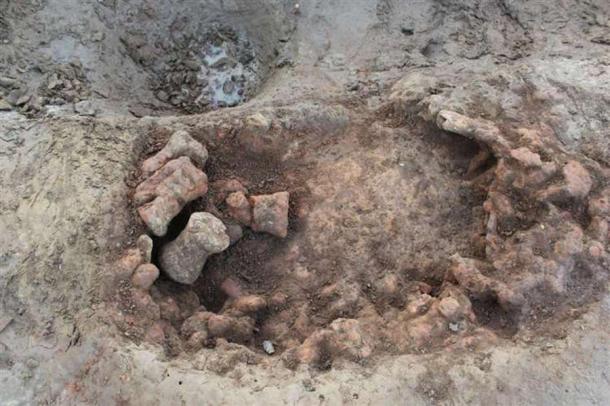 Investigators discovered a lead coffin at the site containing the body of a middle-aged to elderly woman believed to have been a local chieftain. Researchers say she had ‘a pretty difficult life’, which was evident when it was discovered she had osteoarthritis. However, being of high status, she had access to good quality food and lived a relatively long life. A monument the size of a “two-storey house” was also discovered at the site, which reinforces the idea that the woman had a very high social status.

Dr Gerrard said that in the 5th century the woman’s tomb was disturbed but the current building remained intact until the Norman Conquest. This was determined after the discovery of tawny owl pellets, which informed researchers that after the Romans left Britain, the mausoleum was abandoned somewhere between the 5th and 10th centuries. The site was left untouched by the Anglo-Saxons who, according to Dr Gerrard, may have used it as a navigational structure in the late 5th century.

Top image: The coffin of the leader of Britain’s elite Roman clan, who may also have been a major maker of illegal money that the Romans could not tax. Source: Pre-construction archeology

Russian oligarch Roman Abramovich’s British telecommunications firm Truphone, once worth half a billion dollars, will be sold for $1

Next time in Rome, check out the villa of this once opulent Roman emperor